The lack of affordable home ownership opportunities is having a significant detrimental impact on the economy and the demographic makeup of Sitka. The Sitka Economic Development Association lists affordable housing as a critical issue. The McDowell Group’s annual report on the economic status of Sitka lists affordable housing as a critical issue. Furthermore, the school age population of Sitka has dropped from approximately 1,850 students in 1993 to 1,350 in 2014, while the town population is nearly identical. This represents a tremendous demographic shift. Young families are not moving here or staying here and affordable housing is one of the most significant reasons why this is so.

The Community Land Trust can have significant impact on reducing the shortage of affordable homes in Sitka because it addresses one of the root causes: the artificial scarcity of land caused by government ownership. We are surrounded by federal, state, and city land. A CLT can work here because it is politically palatable for state and municipal governments to put land into a trust devoted to affordable housing. Recognizing the severity of the affordable housing problem, the City of Sitka has given us our first two parcels of land with intent to award a third. We are working with our legislators on acquiring a large parcel of state land. As evidence of local support, we have also been given a vacant lot by a private citizen. 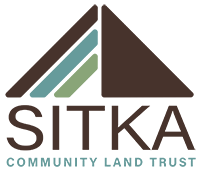